New article on Cotopaxi out today

Released today in the Intermountain Jewish News in the L'Chaim magazine.

An interesting perspective - asking the public to be a jury.  Yet fairly accurate.

cotopaxi-colony.com belongs to Nelson and you will not find the articles there.  You will find his research and his commentary, not mine.

cotopaxi-colony.blogspot.com is this blog where the articles are.  Just look at the home page, down the right side and you will see links to all of the articles I have posted thus far.  (taking a short break and will get back to this in a week or so).

I do not believe I said Saltiel was "guilty as sin" - perhaps "guilty as charged"?  I know I made it clear that I have not and never would call Saltiel a "villain".   And it is not my belief that we are allowed to judge another human.  But we can show the known facts about a situation.  I think the author is attempting to do that here.  Yet much has been omitted that I would definitely want to present to a jury!

I think the greater question is whether this is a "jury" issue?  I still contend that Saltiel simply wasn't in Cotopaxi very much.    And I think the peripheral story is what matters....the fact that Saltiel had just gotten a divorce, married another woman, had small children, was still traveling to NYC and other places, was in court, in jail, dealing with mine transactions and simply not present much when the Colonists were there.

And since the findings are not complete - the story cannot be complete!  Thus the jury cannot convene and the judgement cannot be made.

Ask yourself how you might read this differently if the writer has presented me, representing the Colonists as the defendant?  After all, I suppose my research is to defend the oral histories handed down by the Colonists families.  And that would make the "bounty" side the prosecution....attempting to prosecute the Colonist for their oral histories.  Now that could have been an equally interesting story!

I had to chuckle that I am being portrayed as the prosecution.  There has been no criminal charge made against Saltiel.  I am not attempting to prove anything about Saltiel.  And I do think that's made clear in the article - I'm working to prove the accuracy of oral histories and the facts of what happened.

Yet, overall, a rather interesting take on the story.  What did you think?


*********c2016Cotopaxi-Colony.blogspot.com All content is copyright protected and may not be copied, reproduced, reused or reposted in any manner without permission.
Posted by Jennifer Moore Lowe at 11:16 AM No comments:

In the past few years, I have given presentations on genealogy, Cotopaxi, and other topics.  Sometimes, the venue doesn't have an overhead projector, so I use 2' x 3' posterboards that I have covered with diagrams.

When I share a family tree, I print out all the pages, trim them, tape them together and create a scroll.

It will be perfect for displaying family trees in small settings, and to show the powerpoint presentation on Cotopaxi!  What's even more fascinating is that I can download anything to my iPad, connect that to the projector and use my iPhone as a remote to page through the slides.

The guy at the Apple store didn't know if I could get that to work....so I'm quite pleased with the end results! 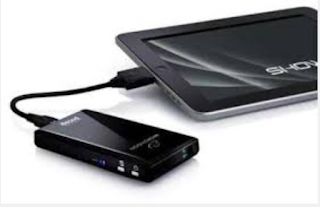 Now, when I travel, I just take my iPad, iPhone and this projector with is about the size of 2 iPhones!!!

I can share any family tree in a format up to 100" wide on a white wall or sheet.   When I do craft presentations, teaching techniques,  I can use my iPad camera to zoom down on my hands and share with a crowd any craft technique that I'm doing.  And I can zoom in on a photo and trace it with great detail.

Bottom line....if you want the presentation on Cotopaxi to be given in your home or to a small group....I can now supply everything needed - all you have to provide is a white wall or white sheet!

*********c2016Cotopaxi-Colony.blogspot.com All content is copyright protected and may not be copied, reproduced, reused or reposted in any manner without permission.
Posted by Jennifer Moore Lowe at 7:46 PM No comments:

My name is Jennifer Moore Lowe and I am the author of this site. I have an MBA degree and I have been doing genealogy research since I was 16 years old. These are the questions I am asked most often:
1. Are you Jewish? I am not Jewish. I do not descend from anyone at the Cotopaxi Colony. Nor does anyone in my family. However, I do love the Jewish people and I love Israel and travel there as often as I can.
2. Why do you research the Cotopaxi Colony? Our parents purchased the Texaco station in Cotopaxi in 1973. Dad died in 1992, but mom continued to live there until 2007. They are both buried in the Cotopaxi cemetery. I am interested in local history. I live about 35 miles east of Cotopaxi.
3. How did you get started doing this research? One of the Colony descendants asked me to complete his family tree. In that process, he would ask me questions about the Colonists and I did not have answers. I told him I would see what I could find out. That began sometime before 2005.
4. Will you write a book? Eventually. But it seems the more I find, the more questions it raises and the more research I need to do.
5. What can I do to get copies of your research? I will happily share what I have found with anyone who descends from the Colonists. For others, I am happy to assist them with their research, but the research I have completed will remain proprietary until it is published.
6. Where is the Cotopaxi Cemetery? First, I think it's important to know that the Jewish burials were the very first at Cotopaxi. The gentiles graves surround them. For about 125 years, the Jewish graves were unattended. My brother, Nelson Moore, and his family, set about to clean up the area, fence it in, add markers and headstones. He cared when no one else did.
Take Hwy 50 to Cotopaxi. Turn north, go over the bridge. Go past the school then turn left and follow the gravel road up behind the school. There's an open gate and you can drive right in. You will see the fence and the Menorah on your left.
7. How do I read this blog? Many people read the most recent post first and that's fine. But if you want to read it in the order it was written, go below to the "Blog Archive" and start with February, 2016. Or you can go to the section "Critical Documents" below and that is in date order. I think it's important to read everything in order to get a feel for the entire story.
8. Is more information available?
The Cotopaxi KehilaLinks site at Jewishgen
The Cotopaxi-Colony website

This is a list of what I consider to be the essential documents concerning the Cotopaxi Colony. All of these documents were referenced in Flora Satt's 1950 Thesis on Cotopaxi. No "new" discoveries here....just posting the docutments in full so we have access to them. As I post blogs with new documents, I will add them to this list in date order. You can then click on the link and read each blog.

June 29, 1882 To HEAS from Julius Schwarz. The first report we have on the Colony

July, 1882 Cotopaxi had an Ark, a Torah and a Synagogue

Oct 27, 1882 A longer reply from Saltiel to the American Hebrew

Dec 27, 1882 Saltiel’s response to the Jewish Messenger’s report (see above)

Jan 30, 1883 The Kohn & Wirkowski report on Cotopaxi - a rebuttal of the Schwarz Report.

How can you support Israel?